Did you happen to catch it last night? Do you even know what it is? I know about it because of One Direction. In case you don't know, it's this fundraiser to get kids out of poverty, and all kinds of good things like that. I watched last night. Of course I did, One Direction was apart of it.

It was good. It was sad. This one part in particular really, really got to me. Jack Black went to Uganda and they were playing clips of it throughout the show. This part, around the three minute mark especially, really hit home to me. Really devastated me.


The environment, to me at least, was really similar to India. It broke my heart when Felix said he wanted to go home with Jack. I also found it really cruel to play Lay Me Down by Sam Smith during that clip, man. As if that song needed to be anymore touching.

There were at least, like, 11 Felixs for me in India. A massive upwards of 11, surely, if you count all the kids we met who actually had parents. Here are just a few of my Felixs. 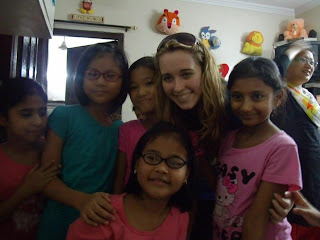 These beautiful girls were at the orphanage we visited. They spoke amazing English and they were asking all kinds of questions like our favorite flowers, and they sang for us, and they asked Melanie and Autti to take our picture. We told them how we loved momos (a really yummy Indian dish that I mentioned earlier. Sticky, steamed dough filled with meat or vegetables. Flipping delicious) and one of the girls said she knew how to make them. One of my companions joked that we should take her home. This little girl actually looked at one of the caregivers, wondering if she could go with us.

My word, my heart.

They all gave us hugs before we left. The girl in the center kissed my cheek, too.

One night we were in a rickshaw, my grandma, David, and I. It was dark, and late, and I was feeling a little homesick. I was texting my mom (and I racked up a massive bill on my grandma's phone. Sorry Grandma!) and a little beggar boy came up to us when we stopped. This was nothing new at that point, but that night it really got to me. It seemed to be a really long stop, and I fought crying so hard while he was there. He was so little. He was wearing a Snoopy onesie. My little brother Asher's room is covered in Peanuts characters. I got to thinking about what if that were Asher out on the streets in a little Snoopy onesie. As we pulled away from him, I don't know if I did well at hiding my tears from my grandma and David, but they didn't say anything.

We went to Wete's that night and my mind was wrapped around him. I remember walking back to get another rickshaw back to our hotel, just wondering if I could get him on the plane home with us, if I could adopt him somehow, if there was any way. I asked my poppy about it the next morning at breakfast. He told me to ask Sarah. It was a bit of an anecdote during his sermon at church.

For some reason, I get chatty at night. If you're interested in getting to know me, you might want to try to keep me out late. Ha. Anyway, Autti and I were talking about him. I told her if we saw him again, I didn't think there was any way I could keep myself from pulling him into the rickshaw with me and kidnapping him. (Would it really be kidnapping? I'd give him a better life. But... Yes, I know it's kidnapping if it's against his will. :/) We got onto the subject of what I should name him. I jokingly suggested Snoopy because of his shirt (It's also often that I get a bit silly later at night) and she said John Cashmere because John cracked my back and his co-worker kept trying to get us to go to Cashmere, where he lived, and we never got his name.

I also threw in that his last name could one day be Styles, but I think that's a whole different topic that I'm not going to talk about right now. Though it is getting late. Maybe give me a few minutes and I'll bare my soul even more while laughing at myself and the things you add.

Anyway, Red Nose Day did its job of getting me to think and whatever. They also mentioned that some of the money they raise is going to Nepal. It's funny because, obviously, watching videos of kids in poverty has always affected me, it always affects everybody, but I feel like it's worse now that I've been somewhere like that. I wouldn't have even been able to tell you where Nepal was before I went to India (geography is not one of my strong points. I would have said Italy). Now, not only do I know where it is, I know people whose family lives there. Sarah and Wete come from Nepal. Their parents still live there.

So mostly I just wanted to vent tonight. The kids of India have been weighing me down, in the best possible way-strumming on my heart strings, as Ed Sheeran would say (oh, yeah, I also get rambly at night)-and I just wanted to talk about them. Red Nose Day is still open to donations if you're interested.

One last thing, I'd like to dedicate this blog post to all of the girls of the orphanage, to Robin and Sylis, to the girl with the smile, and her sleepy brother. To Anu, to the little boy who blushed when I hugged him. To the boys at the slums that held hands while crossing the busiest street I've ever seen and getting to the other side before we did. There's a lesson in that we all should learn. To the little waiter at our restaurant in Agra who carried my coffee like a champ and whose hands must have gone numb a long time ago. To the boy who followed us around in Agra and blew my mind by getting back to our taxi so quickly. To the boy who followed us around the Taj Mahal that I wanted to cry over when I barely whispered cello to (or however you spell that word, which means go). To Snoopy John Cashmere. To all of the kids that stole my heart in India. You were my highlight.
Posted by Unknown at 8:28 PM